With the passage of Tax Reform, some mid-market and small business owners are “feeling like a kid in a candy store.”  The economy certainly seems to be picking up momentum and real wages are rising for the first time in almost a decade.

Tax Reform put even more candy in the store for mid-size and small business owners.  The Section 179 Tax Deduction was increased from $500,000 to $1,000,000 for qualified capital purchases.

Essentially, Section 179 of the IRS tax code allows businesses to deduct the full purchase price of qualifying equipment and/or software purchased or financed during the tax year. That means that if a business buys (or leases) a piece of qualifying equipment, it can deduct the FULL PURCHASE PRICE from its gross income. It’s an incentive created by the U.S. government to encourage businesses to buy equipment and invest in themselves.  Like I said, CANDY!

But wait… is it better in the long run (think long run) to eat candy…or to eat a apples?  Which will make your business healthier and stronger and more likely to survive economic and business uncertainties?  Does tying up millions of dollars of liquidity in fixed equipment sooner than business needs require just to get a tax deduction really make sense?  If something goes wrong in your business and you need to raise cash, will you be able to get full value for that now “used” equipment?  If the economy tanks, will the value of that used equipment tank with it?

Tax driven decisions are often cases of the tail wagging the dog.  Instead of buying more equipment to save taxes, consider whether other options (apples) might be available that increase rather than diminish your liquidity, reduce your cost of insurance and improve your business’ ability to survive uncertainties.

In fact, such options are available, and the good news is that they too have tax benefits.   I’m talking, of course, about captive insurance companies.

Three weeks ago, we addressed the impact of tax reform on captive insurance companies.

Refresher From 3 Weeks Ago

Below is a brief recap from our article three weeks ago:

The table below compares the benefits of small Captive Insurance Companies with Section 179 Capital Purchases for mid-market and small businesses. 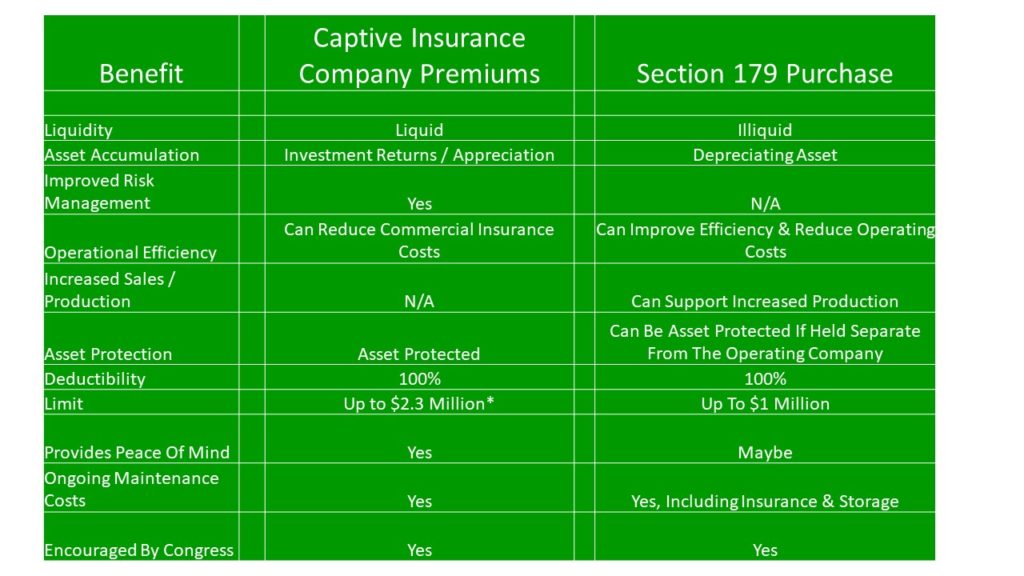 Just like purchasing new equipment purely for tax reasons makes little long-term sense, so does setting up a captive insurance company purely for such reasons.  But for many businesses, the benefits of building a liquid war chest, improved risk management, improved asset protection and tax savings that a captive provides will make captives a compelling proposition compared with capital purchases that benefit from Section 179 deductions.  In most cases, some combination of captive insurance and Section 179 purchases will provide the best road forward for mid-size and small businesses.  Remember, an apple a day keeps the doctor away!