831(b) Diversification Requirements Far Less Daunting Than They Seem

As we noted last week, Congress created quite a stir in the captive insurance industry in mid-December of 2015 when it passed and President Obama signed a so-called “Tax Extenders” bill titled H.R. 34.  This new legislation included Section 262 titled, “MODIFICATIONS TO ALTERNATIVE TAX FOR CERTAIN SMALL INSURANCE COMPANIES.”  These modifications impact small captive insurance companies (CICs) that make an 831(b) tax election.

The legislation’s “diversification requirements” have created quite a stir with some industry pundits and domicile regulators suggesting many existing captives will have to restructure or close.  We believe such allegations are quite exaggerated, as we will explain below.

Small captive insurance companies, as defined in Section 831(b) of the Internal Revenue Code, may elect to pay no federal income taxes on their underwriting profits each year. Underwriting profit is simply calculated as premiums received less claims paid.

Prior to H.R. 34, “small” captives were defined as having premium revenues of less than $1.2 million annually.  Starting in 2017, thanks to H.R.34, this increases to $2.2 million and adjusts for inflation each year thereafter.

What Has Changed With The Passage Of H.R. 34?

What Is The Intent Of The “Diversification” Language In H.R. 34 And Why Has It Created A Stir?

The “diversification” language is intended to prevent captives making an 831(b) election from also being utilized as an estate transfer vehicle.  Prior to H.R. 34, it was possible for a business owner’s spouse or children to own a captive insurance company and pay tax deductible insurance premiums from the owner’s business to the captive owned by a spouse or heirs.  While H.R. 34 doesn’t eliminate the estate transfer benefits of a small captive (CLICK HERE), it does prevent estate planning captives from enjoying the income tax benefits of 831(b) in some cases.  It’s worth noting that legitimate captive insurance companies making an 831(a) tax election can still be utilized as estate transfer vehicles in all cases, the only question being whether they ALSO get an income tax benefit.  H.R. 34’s “diversification” language is confusing, and this has likely been the source of premature alarm bells.

Is There An Easier Way For CIC Owners To Navigate The “Diversification” Language?

The “diversification” requirement forces captives making an 831(b) election to meet one of two tests.  As written, the first test seems rather complicated at face value, making the “diversification” language seem more daunting than it actually is.  However, if the order of the diversification tests are switched, their logic is much easier to follow.  Using this approach, we have developed the decision tree below for captive owners and prospective captive owners. 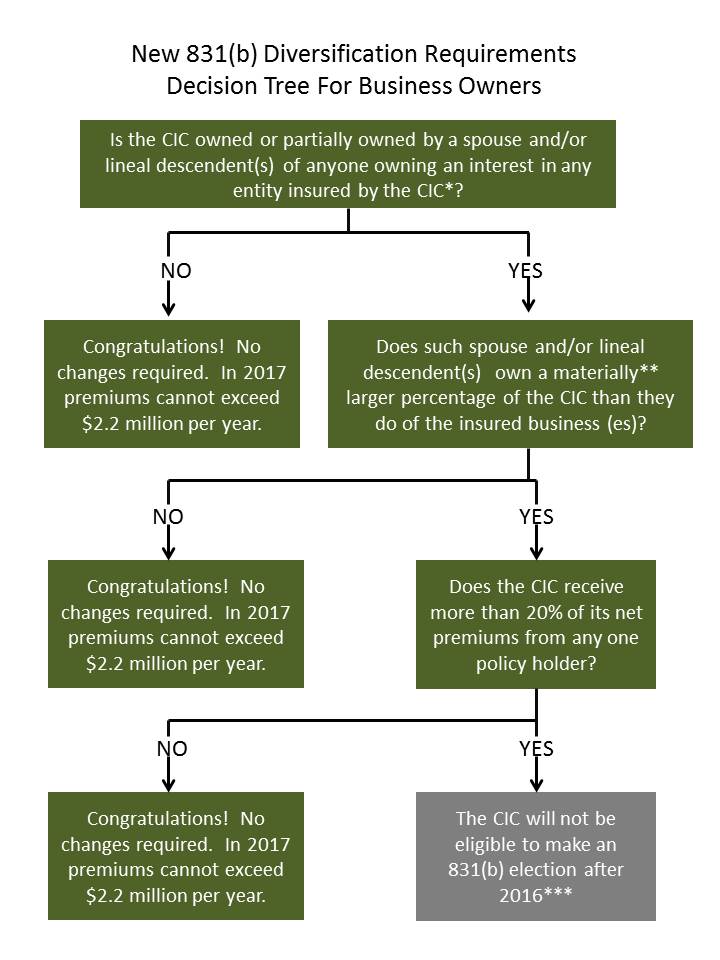 * For instance, does your spouse or child own, directly or indirectly (for instance via a trust)any portion of your CIC?

*** There are numerous options available to CIC owners to enable them to continue to reap the benefits of CIC ownership, continue to make an 831(b) election, and increase premiums paid to their CICs up to $2.2 million  in 2017.

As you can see from the 831(b) Decision Tree For Business Owners, many small captives will require no changes going forward.  Captives that fall into the grey box will not be eligible to make an 831(b) election after 2016.  However, all is not lost.  There are numerous approaches or structure changes that captives falling in the grey box can make to maintain their 831(b) eligibility.  We will address some of these in future editions of Captivating Thinking.

If you own a captive that makes an 831(b) election or are considering captive ownership, reach out to us for a more thorough explanation of the new “diversification” requirements and approaches to structure your CIC to achieve your goals.

Note: This does not constitute legal advice.  Specific circumstances may vary from one CIC owner to another.

Legislative Changes to 831(b) are a Net Positive for Business Owners New Legislation – What’s A Captive Owner (Or A Prospective Owner) To Do?