15 Years Of Debt Or A Captive Insurance Company

I had a mesmerizing conversation this week with business owner, who is exploring owning his own insurance company, specifically a captive insurance company.  I don’t use the word “mesmerizing” often, but it certainly applies here.   He founded his company in 1990 and has grown it into a successful and thriving enterprise.  When I asked him what interested him in owning his own insurance company, he told me that he had just made his last payment on a Small Business Association (SBA) Disaster Loan from the 9-11 terrorist attack in 2001.

His business wasn’t “directly” impacted by the terrorist attack.  None of his property was destroyed.  None of his employees were injured.  In fact, his business was in a city hundreds of miles from where the attacks occurred.  Nevertheless, he said, “the phones went completely dead for six months… we were dead in the water, and I didn’t know if the business would survive.”  He had good employees.  He had poured hours of training into them.  He also cared about them and their families and couldn’t simply let them go.

Fortunately, he was able to secure a Small Business Association Disaster Loan to survive until the phones started ringing again.   Since 2001, his business has weathered other storms and been successful.  When I asked him what interested him in owning his own insurance company, he told me he heard about captives from his financial advisor and other successful business owners.  However, his CPA said his business is too small for a captive.  Unfortunately, his CPA really has no understanding of Alternative Risk Transfer (ART) or Enterprise Risk Management (ERM) with a Captive Insurance Company (CIC).  Paying off the SBA Disaster loan after 15 years jarred him to reconsider captive insurance.  It symbolized the closing of an old chapter and the opportunity to move ahead and take a more proactive approach to control and manage all the risks his business faces.

It is fortunate that he was able to secure an SBA Disaster Loan.

It is also fortunate that he has been able to build a growing, profitable business and finally pay-off his disaster loan.

It is unfortunate that he did not have a captive insurance company to insure his business against business interruption prior to 9-11.

What is an ERM Program?

The impact of ERM with a CIC can be easily visualized by looking at the chart below, which depicts identical businesses over a 10 year period.  The business on the left maintains the status quo with its immature approach too risk management.  As can be seen, this business has less insurance AND less money.  The business on the right adopts ERM with a CIC – a mature risk management approach – and enjoys more insurance coverage AND more money. 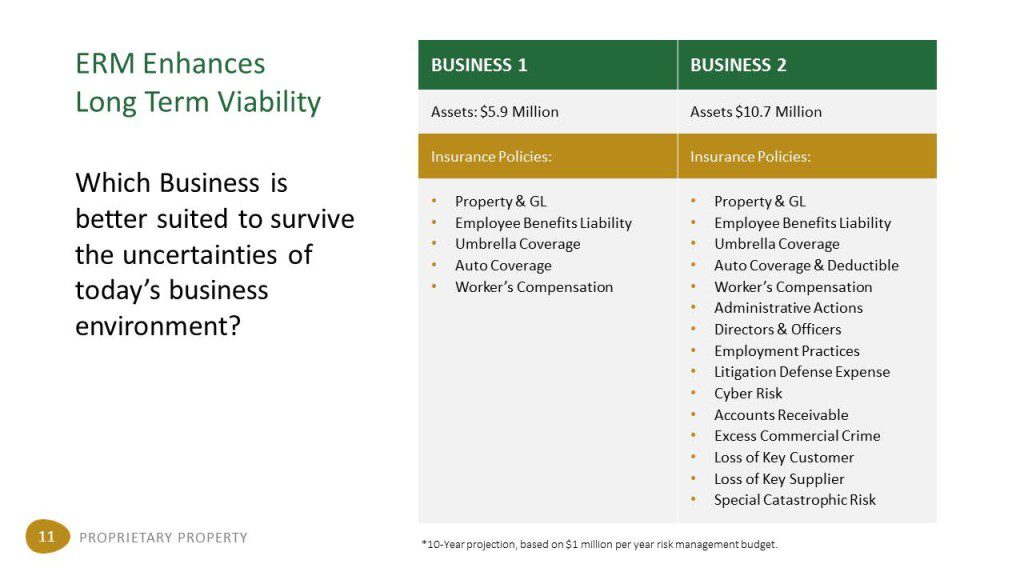 Ownership of one or more captive insurance companies makes ERM possible, because a business is able to both:

When employing a mature ERM model, risk managers and business owners categorize risk as core risk, operational risk and strategic risk (see the chart below).  Most businesses and individuals simply insure core risk and usually do so via third party commercial coverage.  Utilizing an ERM approach, a captive insurance company, in its formative years, gives businesses depth of cover by addressing the second and third layers of risk management (operational risk and strategic risk).  As the captive matures and amasses reserves, it can also play a role in addressing core risk. 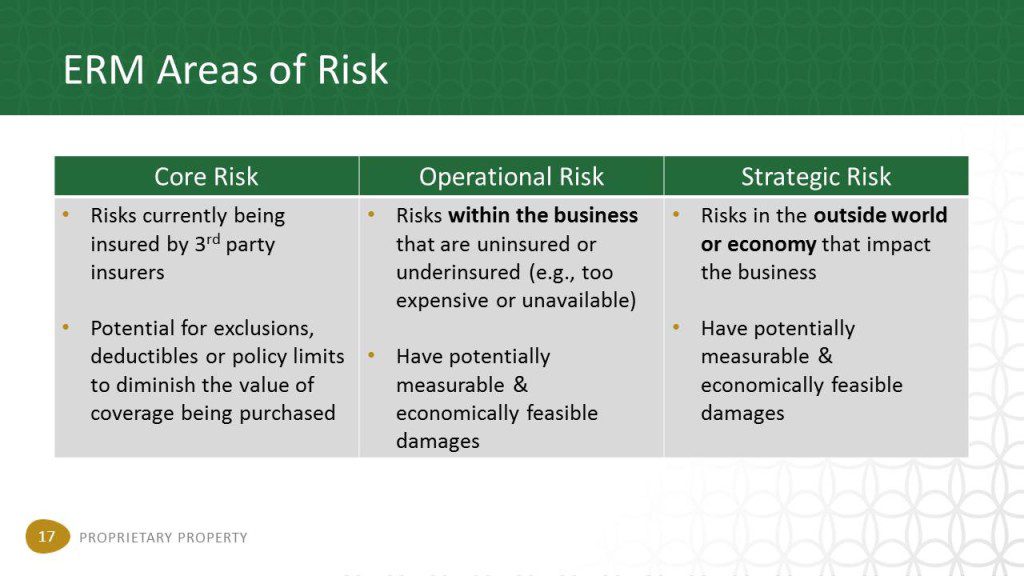 The business owner I spoke with would have benefitted immensely by having business interruption insurance as part of an ERM with a CIC program.  As another example, consider cyber risk.  Many large corporations used to only address cyber threats as an insurable risk in their CIC.  Commercial insurers have caught up to the realities of the market and now offer third party commercial coverage for cyber risks.  Now, many large corporations blend commercial coverage with coverage by their CIC to address cyber risk.  Because of its flexibility, a captive insurance company will often insure risks that are difficult to cover via third party commercial coverage.  Other examples include: supply-chain risk, extended warranties, loss of key customers and terrorism, as the chart below illustrates. 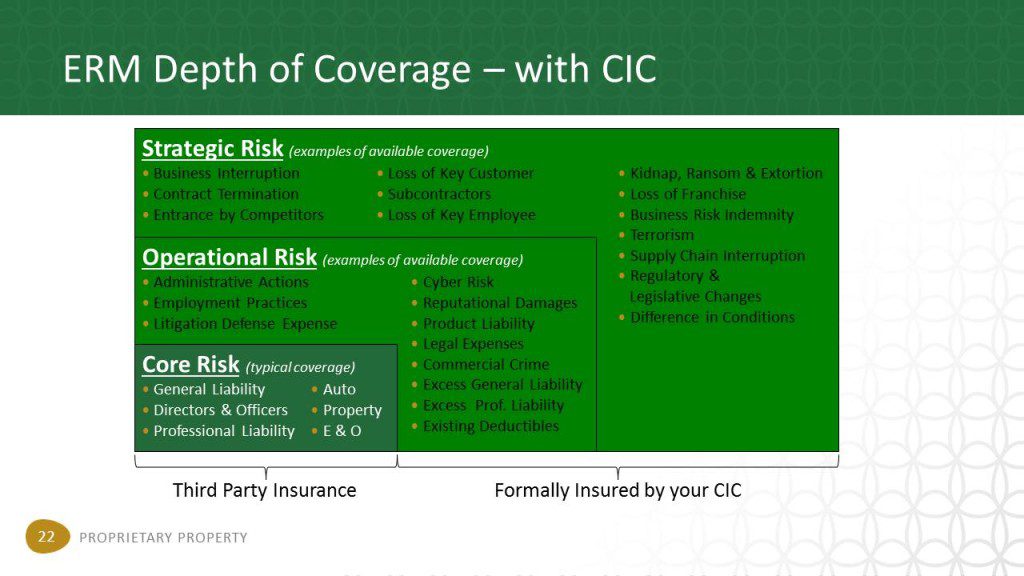 Another characteristic of a mature risk management approach is taking a forward looking stance.  A short term approach to risk management typically views insurance as a year-to-year purchase with the goal of keeping costs as low as possible.  Each year, all premiums paid for third party commercial coverage are a “sunk cost.”  At the end of the year, if there are no claims, the money is gone.  Because a captive insurance company is owned by the business owner(s) or the parent company, premiums paid to the captive insurance company are retained after claims are paid.  Wealth accumulates in the captive as insurance reserves and provides flexibility to the business in its risk management in future years.  A captive facilitates an ERM strategy because it enables a multi-year approach to risk management.

Financial Impact Of An ERM Approach

Captive ownership could be the difference between paying on an SBA Disaster Loan for 15 years or paying for a crisis with monies that would have been paid in taxes in prior years (including business interruption from an “indirect” event).  The prospect of paying for today’s losses with yesterday’s taxes is mesmerizing indeed.