The Best Self-Insurance Money Can Buy

We were having a discussion on how best to explain to remarkable benefits of enterprise risk management with a captive insurance company, when Tom King, Principal and Founder of CIC Services proclaimed, “This really is the best self-insurance money can buy!”

Today, small and mid-size business owners face far greater challenges than their predecessors faced.  In fact, they are far more likely to face existential threats that can completely wipe out their operations.  For instance, cyber risk is a growing and wildly unpredictable threat.  Terrorism and impact from international conflicts are very real threats to businesses and their operations (Even if a business isn’t directly targeted, how long can most businesses last without power…without infrastructure…without key suppliers…without key customers?).

Spending a little time on Ready.Gov, the U.S. Department of Homeland Security’s business preparedness web-site, puts the threats listed above into perspective.  The threats are real and their impact can be catastrophic. Ready.Gov notes that “40% of businesses affected by a natural or human-caused disaster never reopen.”

The government’s site recognizes that low-frequency and high-impact risks are the ones that pose the greatest threats to small and mid-size businesses.  Addressing small business disaster preparedness, Ready.Gov notes that:

“Businesses can do much to prepare for the impact of the many hazards they face…including natural hazards like floods, hurricanes, tornadoes, earthquakes, and widespread serious illness such as the H1N1 flu virus pandemic.

Human-caused hazards include accidents, acts of violence by people and acts of terrorism.

Examples of technology-related hazards are the failure or malfunction of systems, equipment or software.” 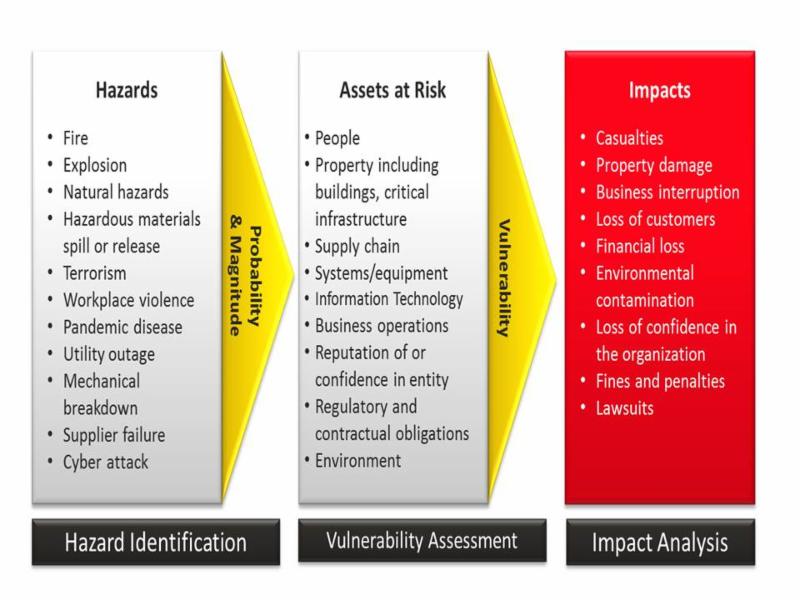 Consider “Human-caused hazards [like] terrorism.”  Ready.Gov makes it clear that any business, large or small, in the U.S. could be impacted by terrorism.  Businesses should have business interruption insurance for lost revenue caused by terrorism including chemical, biological or nuclear attack.

Businesses should also be insured for business interruption caused by failure of the power grid (due to natural disaster, terror attack or a solar storm).  Also, businesses should have robust business interruption insurance to cover lost revenue in the event of a pandemic disease in the U.S.  It is not inconceivable that the government would confine all non-essential workers to their homes for 30, 60 or 90 days to stem a national emergency.

In addition to the existential threats covered above, small and mid-size business owners face risks posed by their own governments – local, state and federal.  Government regulators wield more power than in bygone days.  Overzealous government regulators often “shoot first and ask questions later.”  They often have the power to shut down a business until a dispute can be resolved by the courts.

Finally, litigation is an ever-increasing threat to business owners, and the dangers come from inside and outside of their businesses.  Business owners and their staffs must navigate a complex maze of employment laws, healthcare laws, worker’s compensation laws, environmental laws, tax laws and many other laws that can result in costly lawsuits.  Also, many commercial insurance liability policies will cover damages, but do not cover punitive damages awarded in a lawsuit.  In many cases, punitive damages awarded to plaintiffs are 3 to 10 times higher than compensatory damages.

In our twenty-first century complex, global and ever-changing business climate, is third party, commercial insurance sufficient by itself?

In addition to property & casualty insurance, how much business interruption insurance is enough?

How much insurance would be required to offset the impact of lost trust and a sullied brand or tarnished reputation?

Is it possible to purchase insurance for everything that could go wrong?

And, even if a business owner could, what would it cost?

It’s a truism that the most needed types of insurance either are not available in the third-party insurance market or are often prohibitively expensive.  For instance, it’s nearly impossible to get third-party insurance at any price that would provide coverage in the event your business was harmed in a nuclear attack.  Is that because the risk off loss is too remote?  Hardly.  It’s because, regardless of how likely such an attack may be, its impact on your business would be extraordinary.

Even when you can get reasonably priced third-party insurance to protect against a given risk, the drawbacks are significant:

Most importantly, the biggest drawback to third party insurance is that premiums paid are a sunk cost.  Unless claims are made, insurance payments are always lost money (with the exception of buying peace of mind).  This lost money – lost paying insurance premiums today – reduces a business’ flexibility in the future (and, we will speak to this point later – see “War Chest” below).

For many, a far more powerful approach to risk management that overcomes the trade-offs just noted is Enterprise Risk Management that results in a layered or blended approach.  By combining third party insurance with a captive insurance company, a business owner can establish a far more comprehensive and thorough risk management approach.  ERM is also a better forward looking approach, because the captive insurance company will accumulate additional reserves in years with low claims.  These ERM reserves can provide more robust insurance coverage in the future and, when necessary, can be accessed by the owner (or CFO) as a war chest to address contingencies or unanticipated risks.

Why Is ERM With A CIC The Best Self-Insurance Money Can Buy?

A CIC is one of the most powerful risk management and wealth accumulation tools that a business can access.  When properly employed, there is nothing else that can do what a captive insurance company does.  By operating their own insurance company as part of ERM, business owners and CFOs can:

Captive insurance companies can write customizable coverage for the businesses they insure.  Many businesses face unique risks that may not be addressed by commercial insurers.  Unique coverages can also be very expensive when covered by commercial insurers.  This feature enables business owners and CFOs to say, “this has gone wrong in the past, let’s insure against it in the future,” or “other companies have experienced this adverse event, we can insure this via our captive.”  The flexibility afforded by a ERM with a captive is extremely beneficial in a complex world.

Captives can provide broad coverage without the exclusions that riddle typical commercial insurance policies.  Insurance coverage is worthless if an exclusion prevents the insured from receiving a claims payment when it needs it most.

Premiums paid to a captive insurance company remain the property of the captive owners (usually the business or business owners).  One of the reasons that most businesses are under-insured is that purchasing insurance is a bit like purchasing a lottery ticket.  If you don’t win (or in the case of insurance, experience an adverse event resulting in a claim), your money is gone with nothing to show for it.  With a captive, this simply isn’t the case.  Profits in the captive, defined as premiums collected less claims paid, belong to the captive owners.

Over time, businesses, owners and CFOs can build up a substantial war chest with ERM and a captive insurance company.  This war chest is available to pay insurance claims the business may have.  And, it can also be accessed should the owner or the business require funds.  Assets accumulated in a captive almost always outpace retained earnings or a business’ “rainy day fund.”  Because the captive is a formal form of self-insurance, it benefits from insurance law and favorable tax treatment.  Hence, it is able to accelerate asset accumulation for two main reasons.

Second, the captive is able to invest and grow larger pool of assets.  Large commercial insurers have entire staffs whose sole purpose is to invest reserves (that have not been taxed).

When business owners are ready to sell their business or retire, they keep the war chest.  A successful captive amasses wealth for its owners that can be accessed and enjoyed in the future.  This unique ability to improve risk management and simultaneously stockpile wealth makes ERM with a captive insurance company THE BEST SELF-INSURANCE MONEY CAN BUY.