Every year, millions of Americans, hundreds of thousands of business owners, states, counties and municipalities make decisions based on what Congress wants them to do.

For example, every year countless business owners purchase new vehicles or equipment when their old vehicles and equipment are perfectly serviceable. They make this capital upgrade because newer, better equipment benefits their business AND they experience significant tax benefits as well. Why would Congress offer tax benefits to purchase new vehicles or equipment?   Well, there are a myriad of reasons. New vehicles and equipment may be more energy-efficient – think green. They may help create manufacturing jobs and support U.S. industries.

Congress may want U.S. businesses to be strong, and new vehicles and equipment help ensure business strength.   New equipment may include financing which stimulates the banking industry. The list goes on. Or, consider the mortgage interest deduction and 401(k) which are specifically designed by Congress to encourage homeownership and retirement savings for all Americans.

It’s no secret that Congress uses tax laws to incent businesses to alter their behavior. This includes incenting behaviors like hiring more workers, providing education to employees, choosing green energy, buying or accelerating the purchase of new equipment and, even, owning your own insurance company. Clearly, business owners aren’t going to make a ridiculous purchase just to reap a tax benefit.

For these reasons, and many more, captive ownership is encouraged by Congress.
In fact, consider the chart below from Ready.gov. Ready.gov is FEMA’s disaster preparedness web-site, and it dedicates numerous pages to disaster readiness for small and mid-size businesses.  Many of the risks identified by FEMA are often not commercially insured by small and mid-size business owners. However, captive insurance policies can be written to address all of these risks. Notice the Ready.gov’s chart also includes Pandemic. 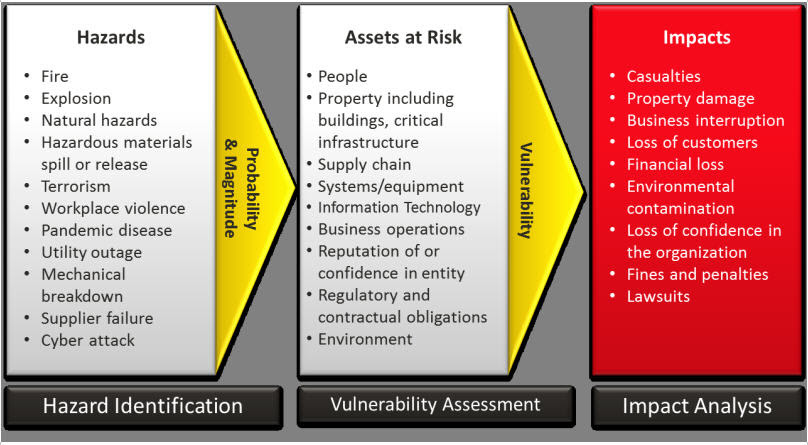 What Are The Benefits Of Owning A Captive Insurance Company?

First, the parent company is able to benefit from a more robust risk management approach. Specifically, the parent company or companies can now formally insure risks that may have previously been uninsured or under-insured (EG business interruption caused by the global pandemic). This could include many of the risks pointed out by FEMA at Ready.gov.

Second, the overall (or aggregate) wealth of one or more companies with a captive insurance company is almost always higher – significantly higher – than the overall wealth of companies without a captive insurance company. This occurs for two primary reasons. First, the parent company takes an expense as it pays its insurance premium to its captive. This lowers the parent company’s taxable income. And, the captive may be eligible to make an 831(b) tax election and be taxed at a rate of zero percent (0%) on its underwriting profit (assumes premiums of $2.3 million or less annually). It’s worth noting that in 2017, this limit increased from $1.2 million to $2.2 million and is now pegged to inflation – MORE PROOF THAT CONGRESS WANTS BUSINESSES TO OWN THEIR OWN INSURANCE COMPANY! Second, the captive is able to earn a return on its reserves (or assets). And, the captive’s asset pool has been amassed with favorable tax treatment, enabling asset growth on a larger starting base.

There are numerous risks that many businesses regularly face and informally self-insure. Which means that if an event occurs, the business “bites the bullet,” often taking a loss, laying off workers and possibly facing partial or total closure (as many have done in 2020).  It’s impossible to know what the 20’s will hold, but it’s reasonable to expect more calamity and crises. With a small Captive in place, making an 831 (b) tax election, businesses can formally insure risks not normally insured by third party insurers.

Adverse events are going to occur whether or not a business has a captive insurance company in place. Businesses with a captive in place have a much larger pool of funds to address adverse events (typically 60% to 80% more) because captive assets receive favorable tax treatment.

Over time, a well- structured captive can help ensure the survival of the business and often double a business owner’s wealth. For small and mid-size business owners, this is one place where Congress “has your back.”